I Predict A Riot

Watch out, Larry: There's a new cat in Westminster - and he's named after a Labour prime minister 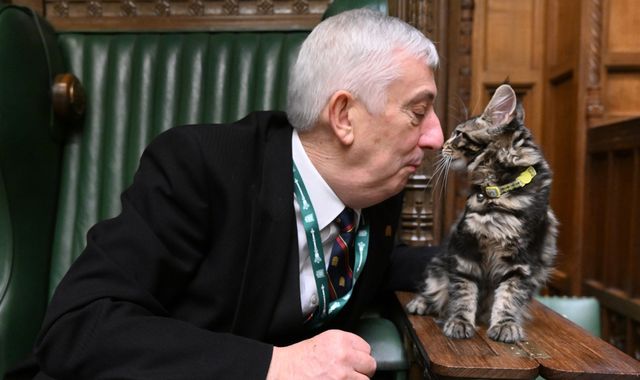 Larry, the Downing Street cat, has made a name for himself after prowling the corridors of power.

But he may be feline threatened after the Speaker of the House of Commons announced he has a new kitten.

The speaker is known for his love of animals, with a wide array of pets named after key figures from across the political spectrum.

Attlee is a four-month-old brown tabby Maine Coon and follows in the paws of his predecessor Patrick, a ginger Maine Coon who died in March. He was named after a Tory peer.

During his time in office, Patrick was elected Purr Minister in a competition run by Battersea Dogs and Cats Home.

Larry the cat has yet to comment on the latest addition to the parliamentary estate.

Sir Lindsay said: "Attlee is just the boldest, craziest, life force you can imagine, he races around my office, much to the amusement of my team, and brings a smile to the face of doorkeepers, police officers, cleaners - and everyone who comes into contact with him.

"I still miss Patrick - who was my favourite pet - but Attlee, who we named after a former prime minister who created the NHS, has cheered us up no end."

Sir Lindsay also owns a parrot named Boris (who "talks a lot"), a Patterdale Terrier named Betty, and a tortoise named Maggie - because "she's got a hard shell and is not for turning".

He previously owned a dog called Gordon, named after Gordon Brown, who placed third in the Westminster Dog of the Year contest.

In July 2020, Sir Lindsay revealed Boris the parrot had taken to squawking "lock the doors" on train journeys between London and Lancashire.

The animals travel with Sir Lindsay and his wife each week to spend the weekend at home in the North West.

"They can see I'm not speaking, but… there's this parrot in my box going 'order, order' or 'lock the doors'."

Sir Lindsay said he believes Boris picked up the phrases because his wife "deliberately" places the parrot next to the television.

(c) Sky News 2022: Watch out, Larry: There's a new cat in Westminster - and he's named after a Labour prime minister<